Cult MTL previews The In-Between presented at the Geordie Theatre Fest: “The In-Between isn’t about simple binaries like right/wrong or winning/losing because that’s not how the world works.”

Read on Cult MTL’s website: Creating a space for conversation 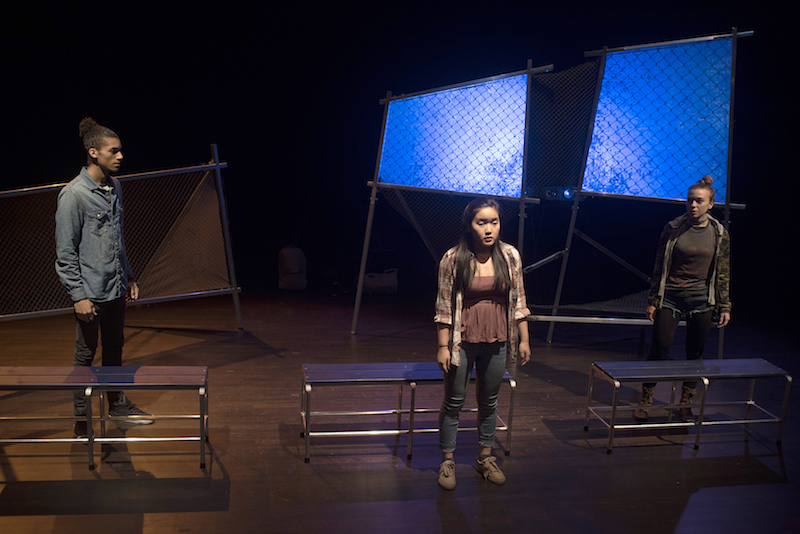 There is a tendency to view certain kinds of art forms as more adult than others. Opera comes to mind. So do ballet, painting, sculpture and various other fine arts.

Sometimes a given form is split in two to create castes of quality — observe the difference between “film” and “movies,” for instance. Other times there’s a blunt demarcation to let you know that one thing is for grown-ups and another thing is for those who can’t (yet) appreciate something finer: “pop” art/music vs. art/music; YA fiction vs. fiction; the CW vs. HBO.

Theatre is often treated as one of those “adult” art forms, and Geordie Theatre has most always blown a raspberry at that notion. They’ve created award-winning and thought-provoking theatre for children and teenagers for almost 40 years and show no signs of slowing down.

This Friday–Sunday, Marcus Youssef’s The In-Between will start a three-day public-facing run as part of Geordie Theatre Fest at Monument-National (Studio Hydro Québec). Given the state of contemporary conversations about race and immigration across the country and everything that is brutally obvious about where young people have their political beliefs shaped, its timing is apt.

The In-Between is “a play for teenagers inspired by a kind of meme-y story that happened a few years ago,” says Youssef. He’s referring to Ahmed Mohamed, who brought a homemade clock to school in Irving, Texas, and ended up being fingerprinted, mugshot and thrown in a detention facility because various faculty members decided that the clock looked too much like a bomb.

The In-Between is not about Ahmed Mohamed, though. Youssef says it’s “about how kids in high school most directly live with the consequences of immigration.” While “consequences” seems like an odd word to use, it makes more sense as the playwright elaborates.

“The diversity of our society is experienced most directly by kids in school, because [schools are] our biggest public institution,” he says. “[The play is] really about three kids living through the consequences of living in a really diverse place.”

Those three kids are high school students Lily, Brit and Karim. Lily feels trapped because of a conflict between Brit, her best friend, and Karim, the guy she likes. The conflict itself is wrapped within layers of all-too-relatable high school goings-on and happenings. In The In-Between, this includes racist, anti-Muslim social media memes and a provocation which leads to a school-wide lockdown.

Geordie Artistic Director Mike Payette — last year’s META winner for Outstanding Direction for Around the World in 80 Days — is directing The In-Between, and says there’s “not a huge difference” in his approach when he’s directing shows aimed at younger audiences.

“In every piece that I direct, I look for the things that are both unique and universal within the story,” he says. “I think that in this case you know how resilient and intelligent younger audiences are, so it calls for extra authenticity, for lack of a better term. They can see through the bullshit; they can see when there’s an element that’s too preachy, or [when they’re] being talked down to.

“It forces all of the artists involved to really pay attention to that and not get bogged down by what the play is about — the climate of xenophobia or what it’s like to be a young person in that high school ecology — but [to look] at the fundamental heart of these human beings that connect them.” 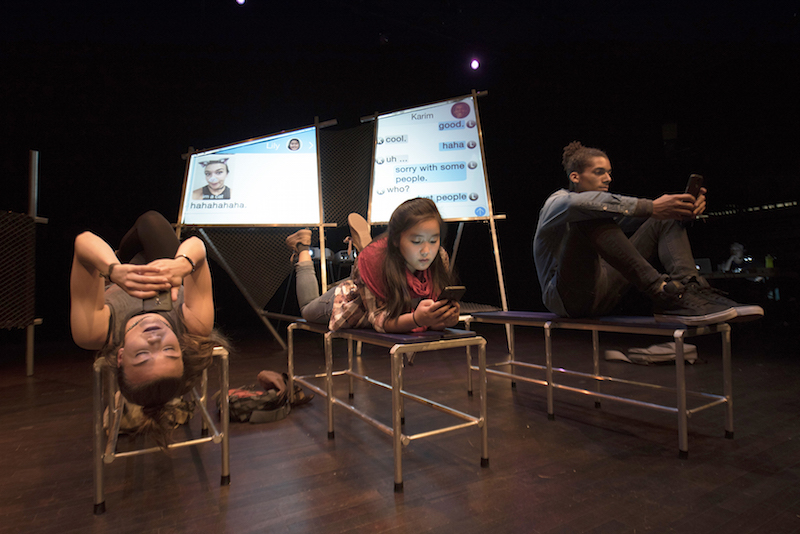 Regarding connection, both director and playwright mention that their production aims to connect with young people by showing them a world they can easily relate to. Namely, a technologically- and digitally-oriented one.

“We [use] contemporary references,” says Payette, “so there’s actually a couple of places through the use of technology — because social media is the fourth character in the play — where we can show images, we can show videos that are actually references to the inspiration as well. It’s not just useful for the teens, it’s useful for the adults that want to engage in conversation with the teens afterwards.” He’s referring to both parents and teachers, here.

“Young people have a whole variety of relationships to technology,” adds Youssef, noting that he knows young people who eschew social media altogether. Writing a play with the ability to foster dialogue between various generations, he says, included knowing enough to not resort to reductive generational clichés about how young people live their lives online.

“People are still navigating the same questions people have always navigated. Yes, that’s mediated in a somewhat different way, and yes technology has impact, but you know what? People are still falling in love with each other, and trying to figure out whether to have sex or not, and drinking, and smoking, and now vaping, and all the same things are happening. I think it’s really important to remember that, because the bill of goods we’ve been sold from the beginning is that [technology] is going to change everything.”

Both Youssef and Payette emphasize the idea that The In-Between is a piece that creates a space for conversation.

“The challenges don’t come with how we address it to the immediate audience that we’re playing for,” says Payette. “It’s really about ‘what is the bridge we can create between them and the ones we want them to have the conversation with’ — the adults in their lives.”

Youssef, himself a father of two “Gen-Z children,” says that The In-Between isn’t about simple binaries like right/wrong or winning/losing because that’s not how the world works.

“Each character in the play, though they come from very different experiences, attempts to navigate their relationships,” he says. “It’s pretty complex, and there’s no good guy and bad guy at all. There are people trying to, as most humans do, navigate a complex series of social relationships in really personal ways.

“We can talk about racism, we can talk about all of those things, but ultimately a lot of it is navigated and manifested in interpersonal relationships. That’s where a lot of stuff gets acted out.” ■

The In-Between‘s public-facing performances are February 8–10 at Monument-National (1182 St-Laurent) in the Studio Hydro Québec. Tickets can be purchased at Geordie Theatre’s website or by calling 514-845-9810.