THREE NEW INNOVATIVE SHOWS SURE TO FIRE UP THE IMAGINATION

Family fun meets innovative ideas at this year’s Geordie Theatre Fest where three shows for different age groups take the stage over the course of two weeks at the Quartier des spectacles’ Monument-National. A beloved staple in Montreal family life, Geordie Theatre is at the top of its game, recently receiving a dozen Montreal English Theatre Award nominations. In bringing three new shows to the Montreal stage, Geordie has its eyes on high-quality and innovative works sure to fire up the imagination.

While Geordie is no stranger to enchanting kids and teens, it’s now vying to engage a brand new audience: babies! One Thing Leads to Another is a ground-breaking theatre show brought in from the Young People’s Theatre in Toronto, where it was the laureate of two Dora Mavor Moore Awards, including the award for Outstanding New Play. Since its debut, the show has been brought back time and time again due to popular demand, and is now making its Montreal debut thanks to Geordie Theatre. One Thing Leads to Another uses playful objects, colours, and sounds to fascinate babies and parents alike. Parents sit on-stage with their tots aged 3-24 months and enjoy 30 minutes of show-time followed by 30 minutes of playtime, where babies can play with objects from the show and with each other. Geordie Theatre is going to extra mile to offer changing stations and a quiet space on-site, so parents can enjoy the fest without any hassle.

One Thing Leads to Another – Image: Avital Zemer

For kids aged 6-12, Little Witch is the show to catch at this year’s Geordie Theatre Fest. The play is the English-language premiere of Pascal Brulleman’s Petite Sorcière, which wowed audiences at Montreal’s Maison Théâtre last fall. Little Witch is a folktale rich with humour and heart, as our heroine Little Witch sets out on an adventure coping with difficult decision-making and loss along the way. The performance on Saturday, February 10 will have an extra dose of fun – it will be preceded by a puppet-making workshop and followed by create-a-fairy-tale workshop, both inspired by the world of Little Witch, open to kids of all ages! 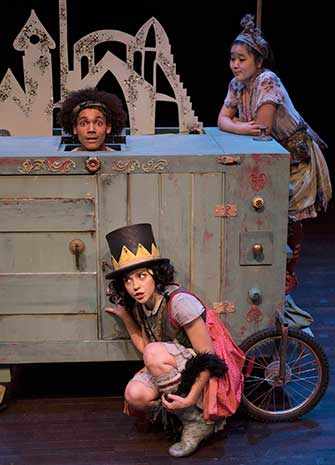 Geordie Theatre is never afraid to bring impactful content to the stage for teenagers. Teens 13-18 can make their way to The In-Between, the latest from Marcus Youssef, author of Geordie’s longest-running hit Jabber and winner of the prestigious Siminovitch Prize underlining excellence in Canadian Theatre. Inspired by the 2015 news story in which Texas teen Ahmed Mohammed’s science fair project was mistaken for a bomb threat, Youssef’s play is a teen drama filled with crushes, fluxing friendships, and unfinished homework that goes a level deeper to navigate xenophobia, mixed race identity, and teenagers’ consumption of violence through social media. The play is timely, brought to the stage by Geordie to start a conversation with teenagers about rising and multifaceted topic of racism in North America, not leaving Quebec behind. Each show will be followed by a talkback with Montreal’s Centre for the Prevention of Radicalism Leading to Violence. Directed by Geordie’s Artistic Director Mike Payette, the recent recipient of the Montreal English Theatre Award for Best Director, The In-Between is sure to find its place as a Geordie classic.

With something for everyone, the Geordie Theatre Fest is the place for families to be.
The fest runs January 31 to February 10, 2019
at the Monument-National Theatre, 1182 St-Laurent.
Further details can be found online at geordie.ca/fest

Tags:geordie theatre fest, little witch, one thing leads to another, the in-between